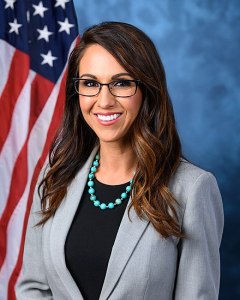 Not just this video clip.  And not just today.  But watch her in the next months as she takes on Washington, as she enters the U S House of Representatives.

As a close friend says, “We need a lot more of these …”

She owns Shooters Grill, a restaurant in Rifle, Colorado, where staff members are encouraged to openly carry firearms.

She beat out the 5-term incumbent Republican in the primary with 54.6% of the vote.  And she beat the Dumbocrat challenger in the general election by focusing her campaign on gun rights, energy, and the Constitution, and denouncing “the heavy hand of government to make us do whatever they want.” Wikipedia says this about her.

On the floor of the U. S. House of Representatives, Breitbart quotes her 13 January:

“Where’s the accountability for the left after encouraging and normalizing violence? Rather than helping American people in this time, we start impeachments that further divide our country,” Boebert said. “I call bull-crap.”

Hopefully Daily Wire and others will provide us with the facts of her congressional life among the gators in the swamp, which MSM will certainly not do.

May God shower her with wisdom to complement her backbone as she leads. Wisdom is supreme; so acquire wisdom. And whatever you may acquire, gain understanding. Proverbs 4:7.

1 Response to Watch This Woman!