Posted on 15 November 2020 by jrlclemson

“Daniel answered and said: ‘Blessed be the name of God forever and ever, For wisdom and might are His. And He changes the times and the seasons; He removes kings and raises up kings; He gives wisdom to the wise and knowledge to those who have understanding. (Daniel 2:20-21)

God intervenes in the affairs of men to raise up leaders and to remove others from power.  I believe that not only did He do so in 2016, but He is at work even now regarding the person to be inaugurated as President of the United States of America January 20, 2021. 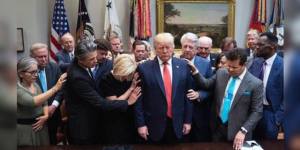 Please note the Bible study that President Trump’s Cabinet has weekly, led by evangelical ministers and teachers at the President’s request; his asking that evangelical ministers and leaders counsel and advise him, come into the Oval Office and lay hands on and pray for him; his unprecedented support and actions for religious freedom and pro-life principles; and his unwavering support for Israel, God’s chosen people.

Consider the narrative in II Chronicles chapters 18-20 regarding Jehoshaphat. I believe that in many ways this testimony is a type or foreshadowing of President Trump and the 2020 presidential election. Bear with me as I parallel the account.

Let’s start with II Chronicles 18:1: “Jehoshaphat had riches and honor in abundance …”

Before running for the presidency, not only had Donald Trump been a billionaire for decades, he also was greatly admired by many people. Cited in a recent biography, President Obama wrote that many kids want success, to be Donald Trump. When Donald Trump was on Oprah’s show in 1988, years before running for office, Oprah asked him if he would ever run for president, encouraged him to do so, and praised him. In 1998 at a special meeting, Jesse Jackson lauded Donald Trump for hiring a lot of minorities to providing good quality affordable housing for inner-city blacks and other minorities.

And then he ran for and was elected President.

Earlier in Jehoshaphat’s life he made some decisions that were not based on the wisdom of God. Sound familiar? But then, II Chronicles 19:2-3 says,

“And Jehu the son of Hanani the seer went out to meet him, and said to King Jehoshaphat, ‘Should you help the wicked and love those who hate the LORD? Therefore the wrath of the LORD is upon you. Nevertheless good things are found in you, in that you have removed the wooden images from the land, and have prepared your heart to seek God.

It is obvious that God has been moving on the heart of Donald Trump for some years now.

“So Jehoshaphat dwelt at Jerusalem; and he went out again among the people from Beersheba to the mountains of Ephraim, and brought them back to the LORD God of their fathers. Then he set judges in the land throughout all the fortified cities of Judah, city by city, and said to the judges, ‘Take heed to what you are doing, for you do not judge for man but for the LORD, who is with you in the judgment. Now therefore, let the fear of the LORD be upon you; take care and do it, for there is no iniquity with the LORD our God, no partiality, nor taking of bribes.

Note that throughout his land, Jehoshaphat set judges who were just, in power throughout all the land! At the time of this writing, in a single term President Trump has appointed 222 of the 792 (28%) federal judges across our land. While he has not used religion as a test, he has selected men and women of character, who have demonstrated decision making using Godly principles. A rare accomplishment for a president, in a single term President Trump has also appointed an astonishing three associate justices to the Supreme Court, each of which have been God-fearing individuals of strong character.

“Then the Spirit of the LORD came upon Jahaziel. … And he said, ‘Listen, all you of Judah and you inhabitants of Jerusalem, and you, King Jehoshaphat! Thus says the LORD to you: “Do not be afraid nor dismayed because of this great multitude, for the battle is not yours, but God’s. Tomorrow go down against them. … Position yourselves, stand still and see the salvation of the LORD, who is with you, O Judah and Jerusalem! Do not fear or be dismayed; tomorrow go out against them, for the LORD is with you.

In that time, God moved on a man named Jahaziel to give a word from God. Currently, several Christian men and women have prophesied, proclaiming that God has given them a word, a word that President Trump is currently going out against a great multitude, a multitude of manipulators of our election system, some state governors, the media, Democrats, and the celebrities of Hollywood. The members of this multitude severely ridicule God and His people and seek to minimize the worship of God, even banning such during the COVID-19 pandemic. That “word” from current day prophets continues that Trump and his people should “go down against them” but that the battle is the Lord’s; that we should “stand still and see the salvation of the Lord, who is with you.”

While the post-election battle is going on, what should we as Christians do? Should we take up arms and fight, destroy cities, burn down and loot businesses?

Of course, that’s what we should do: worship God, praising Him with loud voices. Regardless of the outcome of this election we are to “stand still and see the salvation of the Lord, who is with you.”

“So they rose early in the morning and went out into the Wilderness of Tekoa; and as they went out, Jehoshaphat stood and said, ‘Hear me, O Judah and you inhabitants of Jerusalem: Believe in the LORD your God, and you shall be established; believe His prophets, and you shall prosper.’ And when he had consulted with the people, he appointed those who should sing to the LORD, and who should praise the beauty of holiness, as they went out before the army and were saying: ‘Praise the LORD, For His mercy endures forever. II Chronicles 20:20-21

Don’t miss the scripture location! Here in the year 2020 note verse 20:20: “Believe in the LORD your God, and you shall be established; believe His prophets, and you shall prosper.” Through all the turmoil, uncertainty, fear and worry of 2020 and this presidential election with its implications on the future of our nation, God exhorts us to believe in him and his prophets and we will prosper. What are his prophets saying? Many Christian prophets continue to say, even after Election Day, that Trump will win the 2020 presidential election and will continue working to fight religious persecution, continue to be a true friend to Israel, to fight the life and health of all Americans, including the unborn, and to appoint even more just men and women to judicial positions.

“Now when they began to sing and to praise, the LORD set ambushes against the people of Ammon, Moab, and Mount Seir, who had come against Judah; and they were defeated. For the people of Ammon and Moab stood up against the inhabitants of Mount Seir to utterly kill and destroy them. And when they had made an end of the inhabitants of Seir, they helped to destroy one another. II Chronicles 20:22-23

Note that when God’s people began to sing and praise God, He set out to destroy their enemies, to fight the battle for them against their enemies. Have you noticed what is happening to the Democratic Party and the enemies of President Trump? The more moderate Democrats are blaming their lackluster performance in this election on the progressives and those more liberal, while those people are blaming the moderates. There is already significant infighting among those opposing Trump, and I believe that will escalate markedly in the coming weeks and months.

“So when Judah came to a place overlooking the wilderness, they looked toward the multitude; and there were their dead bodies, fallen on the earth. No one had escaped. II Chronicles 20:24

Political “dead bodies” have already fallen in from this battle, this election. And there may be more yet to come. While conventional wisdom was that the Democrats would enjoy a “Blue Wave,” taking many Congressional seats from the Republicans, instead many Democrats—including some prominent incumbents—have lost their power, their political position, possibly ending their political life.

“When Jehoshaphat and his people came to take away their spoil, they found among them an abundance of valuables on the dead bodies, and precious jewelry, which they stripped off for themselves, more than they could carry away; and they were three days gathering the spoil because there was so much. And on the fourth day they assembled in the Valley of Berachah, for there they blessed the LORD; therefore the name of that place was called The Valley of Berachah until this day. Then they returned, every man of Judah and Jerusalem, with Jehoshaphat in front of them, to go back to Jerusalem with joy, for the LORD had made them rejoice over their enemies. So they came to Jerusalem, with stringed instruments and harps and trumpets, to the house of the LORD. And the fear of God was on all the kingdoms of those countries when they heard that the LORD had fought against the enemies of Israel. II Chronicles 20:25-29

Jehoshaphat went on to continue as king for years after this battle was won.

What if this happens regarding the US presidential election? What if, against seemingly insurmountable odds, after Biden has been anointed president elect, the election is decided for Donald Trump? What if on January 20, 2021 it is Donald Trump that is inaugurated President of the United States of America?

After such an event, the US economy may soar even higher than the record-setting levels present at the beginning of 2020. There may be an abundance of “spoils” that follow this contentious election.

As you probably know, the entire world is watching this election and its outcome very closely. Much has been said about the comments of world leaders about the alleged “President-Elect” Biden.

What if it’s not Biden?  What if God intervenes, fights the battle for Jehoshaphat and His people, and Trump continues to serve as President for four more years?  The whole world would take note.  Several current prophets have gone on record saying—contrary to what has been said by the pollsters and pundits and election officials and state governors—that Trump would still win this “battle.” These prophets give all credit and glory to God as the sole source of their word of prophecy. What if it came true? “And the fear of God [would be] on all the kingdoms of those countries when they heard that the LORD had fought against the enemies of [God’s people].

What a powerful testimony that would be of God’s power and might!

Meanwhile, let’s join together, worship and praise God, and “stand still and see the salvation of the Lord, who is with [us].

Jerry A Lambert MD is a Primary Care Physician who practices in North Augusta SC.  He is the son of Jerry R Lambert, editor of JawingJerry.