Dear Dems – bitterness is no way to run a country

Posted on 8 February 2019 by jrlclemson

Is this what Trump Derangement Syndrome does to people?

On the sunny side, there was that moment, during Trump’s State of the Union address, when the place erupted with a gusty/lusty HAPPY BIRTHDAY. This was to honor a man in the audience Trump saluted for valor in surviving first the Holocaust and then the Pittsburgh “Tree of Life” massacre – and now his 81st birthday.

There was nearly breakdancing and moonwalking in the balconies of Congress.

Decorum be damned. We are Americans. Freedom is our bequest. Frivolity is our nature. I saw the same gusto at the Navy base in Haifa; also for an impromptu birthday. They are Israelis. Their love of life and country runs so deep they can’t sit still and prefer to party, as it was that day in America – and where else?

Where else but in America and Israel would a solemn occasion turn spontaneously to rock and roll?

Try that in the parliaments of other countries while the leader speaks, and see who comes out alive.

Instead, we insist on joy. We celebrate our freedoms through acts of whimsy. Long ago we traded in their Richard Wagner for our Elvis Presley.

We love fun. Why not? Fun is a virtue that sees us through the worst of times…and it is a virtue that is unique to us. As we have it in this iconic novel, “Talk to a Russian or German about fun.”

So, what’s up with the Democrats?

You saw them. I saw them as Trump spoke…and have you ever seen a more miserable group of people in your life? Is this what Trump Derangement Syndrome does to people?

It has affected their personalities, certainly their faces – so gloomy. Can you go through life wearing a scowl?

Most of my readers referred to Chuck Schumer’s expression as “smirking.” Good word. I saw the same thing.

But there must be a perfect word to describe all of them. I’ve already said “miserable.” Okay…but not the perfect description.

Nancy Pelosi…for her I’ve got “grumpy.” For all of them in fact…grumpy and crestfallen. 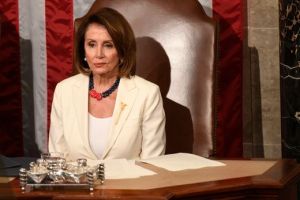 Remember, these sourpusses have much power, so we should not be joking, but like I said, it is the virtue of fun that sees us through the darkest times.

Take note; these are indeed dark times as they lead us toward Socialism and into the killing of newborns.

Plus, these cannot be the best of times for President Trump, with people like Rep. Adam Schiff, the Democrat who hungers to entrap the President from one investigation to another.

Yes, Schiff, when the network cameras swung to him – his expression I’d describe as “hungry,” and for Cory Booker, for him, “angry.” Always angry…perpetually offended.

That goes for all of them, it’s on their faces all the time since Trump was elected. Did I already say “grumpy?” Good one.

But the best one, the perfect one, comes from Yiddish — and drumroll as we announce – UNGEBLUZEN. Yiddish often says it best.

Roughly translated it means “a habitually bad tempered or sullen person.” Multiply that to an entire political party and this needs no translation – oy vey. Better yet – Gevalt!

This entry was posted in Culture, Government, health, Life. Bookmark the permalink.